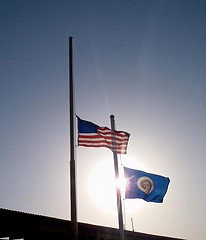 In honor and remembrance of the three Minnesota National Guard soldiers who were tragically killed in a helicopter crash near Kimball, Minnesota, Gov. Tim Walz has ordered all United States and Minnesota flags to be flown at half-staff at all state and federal buildings in Minnesota, beginning today, Friday, December 6, at 2:05 p.m. until Monday, December 9, at 2:05 p.m.

The Minnesota National Guard lost contact with the UH-60 Black Hawk around 2:05 p.m. on Thursday, December 5, 2019, after the helicopter took off from St. Cloud, Minnesota, on a maintenance test flight. The names of the crew members have not been released, pending family notification.

“On Thursday, December 5, 2019, three Minnesota National Guard soldiers were tragically killed in a helicopter crash in Central Minnesota,” reads the proclamation from Gov. Walz. “These fine soldiers served with distinction and put others before themselves. The people of Minnesota honor these soldiers for their dedicated service, pray for their loved ones, and recognize their ultimate sacrifice to our state and country.”