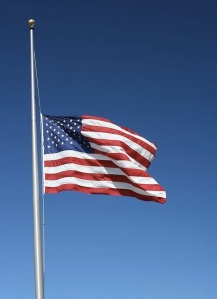 In accordance with a proclamation issued by President Donald Trump, Governor Mark Dayton has ordered all United States flags and Minnesota flags to be flown at half-staff at all state and federal buildings in the state of Minnesota. As directed by the president, flags will be flown at half-staff beginning immediately, until sunset on Thursday, November 9, 2017, as a mark of respect for the victims of the terrible act of violence in Sutherland Springs, Texas.

On Sunday, November 5, 2017, a terrible attack on innocent people occurred in Sutherland Springs, Texas, and the victims and their families deserve our honor, respect, and remembrance.

The Minnesota School Boards Association, a leading advocate for public education, supports, promotes and strengthens the work of public school boards.
View all posts by mnmsba →
This entry was posted in Flags at Half-Staff and tagged Donald Trump, flags, Flags at Half-Staff, Mark Dayton, Sutherland Springs, Texas. Bookmark the permalink.