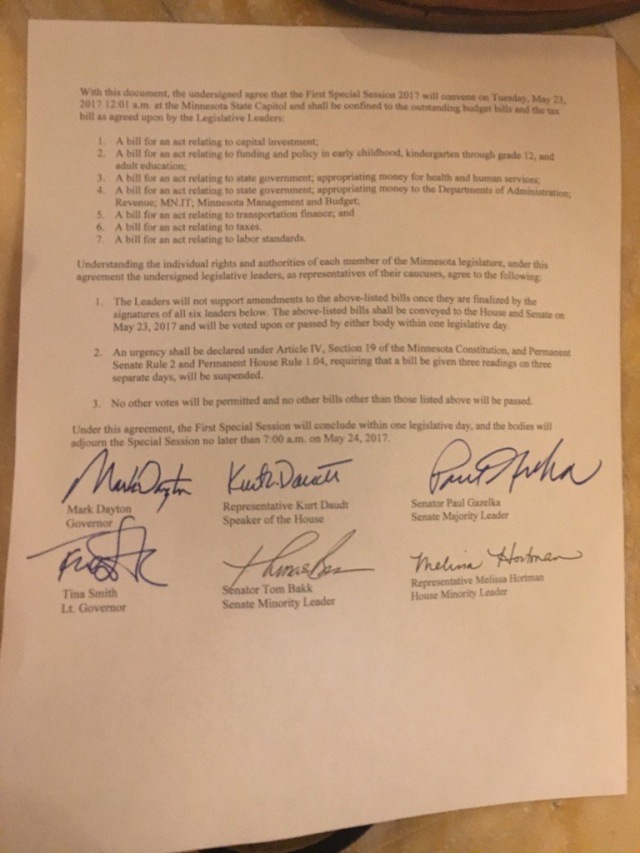 Despite having a nearly $1.65 billion budget surplus, Governor Dayton and legislative leaders were unable to reach a final budget agreement during the 2017 regular legislative session, which ended at midnight on May 22.

Legislators spent six months in committee meetings preparing budget bills. Governor Dayton vetoed 16 major budget bills in the days leading up to the weekend before the session was constitutionally mandated to end. Of those bills, five (Agriculture, Elections, Higher Education, Jobs and Economic Development and Environment) bills were renegotiated and an agreement was reached in both the House and Senate. The following bills were left without resolution when Legislators ran out of time and failed to pass: E-12 Education (which would have included Teacher Licensure), Tax, Pension, Health and Human Services, Transportation, Public Safety, State Government and Bonding.

Announced at 11:30 p.m., an agreement had been reached and Governor Dayton called a special session from 12:01 a.m. until 7:00 a.m. Wednesday, May 24th. The final bills have been negotiated between Governor Dayton, Speaker Daudt and Majority Leader Gazelka. MSBA will monitor and keep you informed of any developments. Please follow Twitter, Facebook and our blog, The Advocate for the latest legislative news.

The Minnesota School Boards Association, a leading advocate for public education, supports, promotes and strengthens the work of public school boards.
View all posts by mnmsba →
This entry was posted in Uncategorized. Bookmark the permalink.