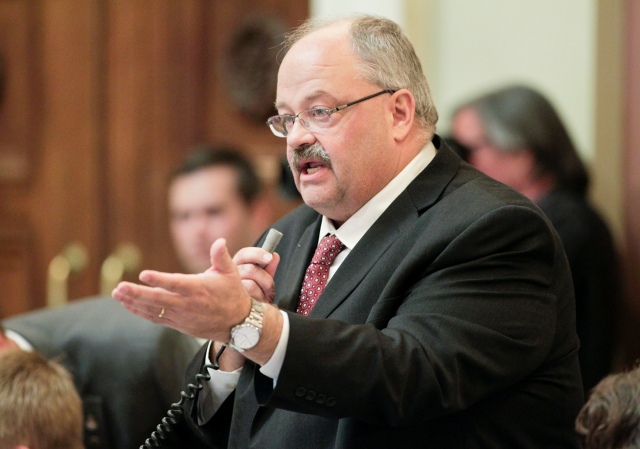 Rep. Greg Davids makes closing comments on the tax conference committee report May 22. The report was passed 123-10 by the House. (Photo by Paul Battaglia)

The first of this session’s major spending bills was passed off the House Floor 123-10 early Sunday afternoon.

First passed off the floor last year with a $2 billion price tag, the omnibus tax bill, now on its way to the Senate, proposes $257 million in tax relief over the 2016-17 biennium and $543 million in the subsequent biennium.

“We tried to help folks from [age] zero to when they are not here anymore,” said Rep. Greg Davids (R-Preston), who sponsors the bill with Sen. Rod Skoe (DFL-Clearbrook).

While the bill received overwhelming bipartisan support, DFL leaders noted concern for ongoing tax breaks, and what that could mean to the state’s budget if the economy heads south.

“One of my chief obligations is to make sure the budget remains balanced,” said Rep. Erin Murphy (DFL-St. Paul). “Today we are choosing to do tax cuts, and it will limit our ability (to deal with other issues). Because we are on the very last day of the session, I’m concerned we are making decisions that are rash.”

Visit https://youtu.be/bl3Lxt9aZ-A to watch a debate of this bill on YouTube.

A provision that would give approximately $35 million in tax breaks to tobacco manufacturers created heartburn for several legislators who have actively promoted tax policy that would limit tobacco use.

“There is one glaring mistake in this bill,” said Rep. Laurie Halverson (DFL-Eagan). “We’ve worked really hard to not have another generation addicted to tobacco. … Why we are giving these tax breaks to people outside Minnesota is beyond me. The policies we put in place help people to never start. Take that $35 million out of there, send it back.”

Provisions in the bill include:

Davids said that this bill contains proposals from both parties and the governor.

“For someone to suggest this is a DFL bill, you are about half right. There are DFL provisions and Republican. … This bill is crafted for the entire state; for every age category for everyone. This is a great product.”

Visit http://www.house.leg.state.mn.us/sessiondaily/SDView.aspx?StoryID=10312 to view this story at Session Daily.